The volume of electronic payments surpassed cash transactions in 2016, beating fiat for the first time in history. Bitcoin could overtake credit and debit card payments within the next decade.

The chart provided by EI below does not take account of other Fintech or financial service providers such as Alibaba’s Alipay, whose market cap is larger than that of PayPal, at $60 bln.

Bitcoin settles around 200,000 transactions on a daily basis, according to the world’s most widely used Bitcoin wallet service provider. 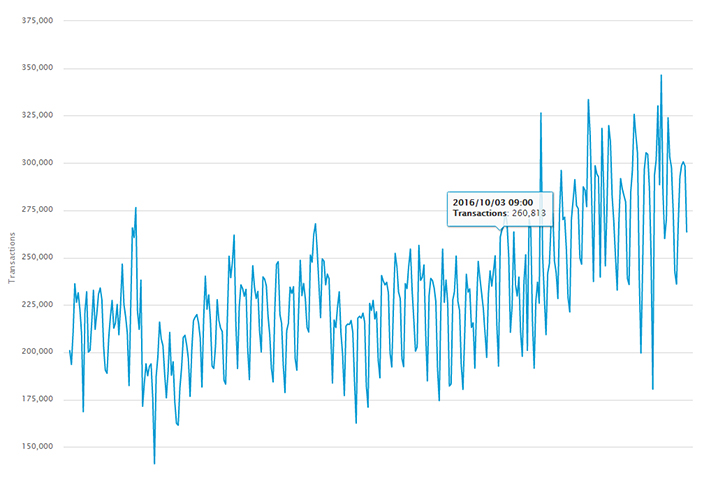 Alipay, which controls over 50 percent of the online payments market and more than 78 percent of the mobile payments market in China, settles 80 mln transactions on a daily basis, processing around $500 bln annually. The Chinese financial network also supports 900 mln active users who use the application to process all types of money transfers.

PayPal, the largest financial network in the US, settled over $280 bln in 2015, demonstrating a dominant control over the US mobile payments market.

If the EI study on electronic payments and cash transactions had considered Bitcoin, Alipay, PayPal and other popular financial platforms, it would have shown a drastic margin between the total volume of cash payments to electronic transfers, by at least a few trillion dollars.

This means, on the chart provided below by Ninja Economics and EI, that the line graph of electronic payments would have surpassed $25 trillion, surpassing cash payments by a considerable margin.

Bitcoin to provide the necessary infrastructure

The role of Bitcoin in the era of electronic transfers is vital in the sense that it still remains one of the only methods of money transfer that allows users to send money on a peer to peer basis within a decentralized ecosystem. The network itself isn’t prone to manipulation or vulnerability and a central entity or administration has no authority over the settlement of transactions.

Similar to how credit and debit cards overtook cash payments for the first time in history, Fintech or non-bank transactions could very possibly overtake credit and debit card payments within the next decade. If so, Bitcoin will be at the forefront of it, providing the necessary infrastructure for a global user base to handle money with financial freedom and privacy.