Top 5 Reasons Why Bitcoin Is Better Than Gold

Top 5 Reasons Why Bitcoin Is Better Than Gold

General
171
No Comments
Share Tweet Share Share Pin it
Bitcoin or Gold? Which do you prefer, Bitcoin or Gold? Which do you think does better in times of crisis? I understand that this is one of the dilemmas for investors who are seeking for protection especially in times where the economy is falling or not doing great as expected. It has been one of

Which do you prefer, Bitcoin or Gold? Which do you think does better in times of crisis? I understand that this is one of the dilemmas for investors who are seeking for protection especially in times where the economy is falling or not doing great as expected. It has been one of the mindboggling thoughts that had me thinking all this years. So finally, I decided last night to stop wondering and start doing some research about it. Let me share with you this amazing read below.

Hopefully, this will help us determine an clear the confusion. which is better, Bitcoin or Gold?

I have not written about the relationship between gold and Bitcoin since the end of 2015. However, given the recent price action in both of these assets it is time to revisit the value proposition between the two alternatives to paper money.

Gold is the oldest means of exchange in the world and the price tends to rally during periods of fear, uncertainty and inflation. Gold had a fantastic rally from December 2015 until the day after the U.S. Presidential election. The rise rose from $1046.20 in late 2015 to highs of $1377.50 per ounce in early July 2016 following the shock of the Brexit referendum. Meanwhile, over the same period the price of Bitcoin, the cryptocurrency rose from around $430 in December 2015 to the $660 level in the immediate aftermath of the Brexit vote. Gold rallied by over 31.6% over the period while Bitcoin added almost 53.5%. Gold and Bitcoin moved together in a sign of rejection of paper currencies. After all, both gold and bitcoin are alternative means of exchange.

Over recent weeks, the two alternative exchange instruments have gone in different directions which could a result of a bifurcation of political opinion in the world that has created surprising election results in 2016. Gold has tanked and Bitcoin has continued to move higher.

Gold has moved appreciably lower in the wake of the Presidential election. 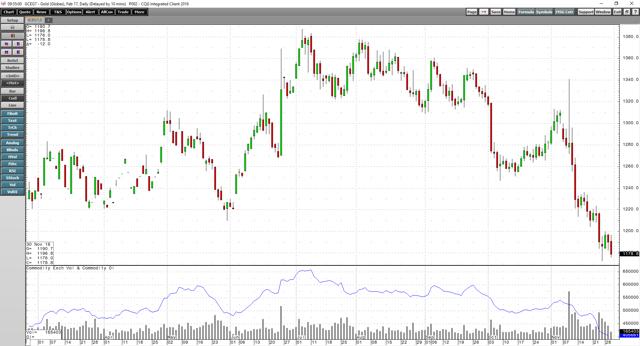 As the daily chart of COMEX gold shows, the bull market of 2016 appears to have come to a sudden end in the wake of the election. Gold declined from $1341 in the immediate aftermath of the election of President-elect Trump to lows of $1172.80 on November 25, a decline of more than 12.5% on the active month February futures contract. The chart also highlights the fall in open interest, the total number of open long and short position in COMEX gold futures. Open interest rose to a higher of almost 658,000 contracts in July but there were fewer than 406,000 contracts of positions recently. The decline of 38.3% is a sign that many holders of gold have exited positions. 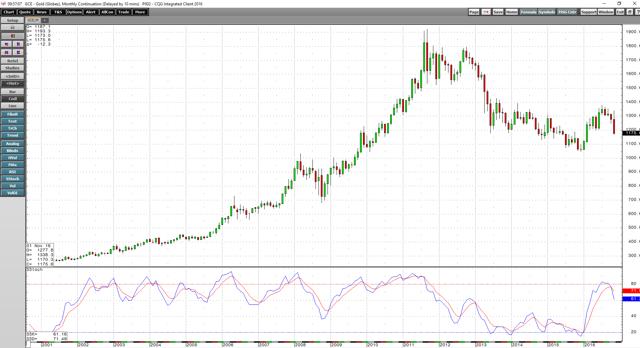 As the monthly chart illustrates, the move lower did lots of technical damage to the gold price. The slow stochastic, a momentum indicator, indicates that the move broke the back of the gold bull market as the technical metric crossed in overbought territory indicating the current bearish trend. Moreover, as today is the last day of the month of November, gold will put in a bearish key reversal trading pattern on the monthly chart and it will close near the month near the lows. The last time a pattern like this presented itself was in September 2011 when gold began its descent from all-time highs at $1920.70 per ounce. Support for gold is now at the December 2015 lows at $1046.20 per ounce and below there it could potentially head for triple digit support at the $850 per ounce level. Gold looks ugly.

While gold fell in the wake of the U.S. election, Bitcoin did just the opposite. 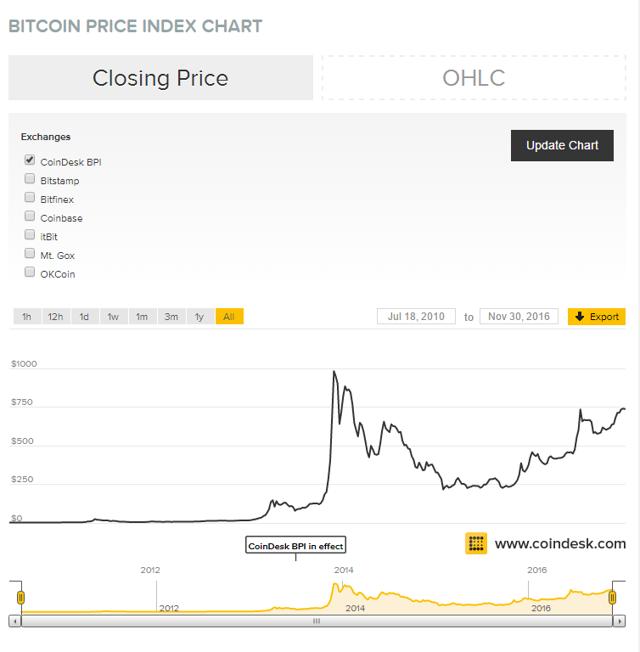 One of the reasons why Donald Trump won the election was his expert use of the technology of social media to reach out to millions of voters on an individual level. The rising popularity of Bitcoin around the globe as a currency is because it has no central bank or governmental body influencing its value. The Brexit vote was a rejection of globalism as was the election of Donald Trump in the United States. The rise of Bitcoin is likely a reaction on the other side of the proverbial coin.

The fact is that young people and millennials are more likely to accept cryptocurrency as a means of exchange. In the U.S., Donald Trump was not the only candidate who represented a rejection of the status quo, Bernie Sanders on the other side of the political aisle did the same thing. Sanders came very close to beating Hillary Clinton in the primaries and might have given President-elect Trump more of a run for his money in the general election. Sanders, a 75-year-old democratic-socialist, took on traditional American politics and gained the support of many millennials. The U.S. electorate remains divided after the election of 2016, with many young people disheartened with the results. To that segment of the population, Bitcoin has a particular appeal.

Political changes on the international scene

I recently received criticism from a reader and fellow analyst when I wrote that gold was moving lower because the period of uncertainty has ended. The analyst said that if I took a historical view, the election of Donald Trump and Brexit vote in the U.K. has created a dramatic increase in uncertainty. I respectfully disagree.

I view this analyst as representative of the view of many millennials. His handle on Twitter includes the word Bitcoin. In his video, he quotes historical references as a reason why the amount of uncertainty has increased dramatically following the election. However, where I differ with this gentleman is that I believe for the first time in 2016 we now have certainty. We know that the U.K. will depart from the European Union. And, Donald Trump will be the President of the United States. While many in the U.S. and around the world may not support those outcomes, they are certainties and reality.

There are political changes afoot around the world. Over past decades we have lived through many political and economic changes. The fall of the Soviet Union in the early 1990s markets a dramatic change in the world. The economic rise of China did the same. The rise of globalism and terrorism changed the world and the event of 2016 will do the same. History is fluid and now that there is a political path forward in the U.K. and U.S. there is a bit more certainty than there was last year at this time, in my opinion at least. I know many will disagree with me on this point. However, one thing we probably all agree on is that social media and technology has done more to change the world since the 1980s than anything else. Bitcoin is a child of the technological revolution, it is global and it is gaining interest and value. When it comes to Bitcoin, the technology of tracking the cryptocurrency is a revolution for all market.

Blockchain technology will take off in 2017

In September 2015, I wrote a piece for Seeking Alpha about blockchain technology. A block is the current part of a blockchain that records some or all of the transactional activity for an asset, like Bitcoin. Once a transaction is complete, the blockchain becomes a permanent database.

Blockchain technology is likely to revolutionize the operations or back office functions of financial markets and services bringing them into the twenty-first century. Meanwhile, there are also other applications across a wide range of businesses. Property and real estate markets could utilize the technology as can governments, supply chains and almost all other businesses that need to track transactional activity. Blockchain is part and parcel of Bitcoin, but the attractiveness of the currency that is pan-global will likely continue to grow and the price of the cryptocurrency should increase in value.

The trends are your friend in gold and bitcoin

In all markets, price trends are powerful forces. When it comes to gold and Bitcoin, the trends were both higher throughout much of 2016 but that seems to have ended in early November.

I see many parallels between the election of 2016 and the first one I voted in, the 1980 contest between Jimmy Carter and Ronald Reagan. I have written about the similarities in a recent article. The reaction to Ronald Reagan by those who opposed him was very close to what we are currently seeing by opponents of President-elect Trump. However, Reagan wound up being very positive for the U.S. economy and under his administration two things happened. Gold and precious metals prices moved appreciably lower and technology flourished. Given my opinion about the similar nature of 1980 and 2016, I believe that the chances are we will see a repeat of history. However, while there are parallels, interest rates were sky high when President Reagan took office and they will be close to historical lows when President-elect Trump moves into the White House. There have been many changes in the U.S. and the world over the past 36 years, so things will not be the same, but the parallel means that the markets could act very similarly. I continue to believe that gold will struggle and Bitcoin will move higher as the world will reject low interest rate central bank policies of recent years and embrace technology. Meanwhile, gold is a creature that does well in uncertain times, for now I am sticking to my guns by believing that, like it or now, certainty now prevails. Therefore, I am bullish on Bitcoin and bearish on gold. The events of 2016 have sent a message to the world, deal with it!

I have introduced a new weekly service through Seeking Alpha Marketplace. Each Wednesday I will provide subscribers with a detailed report on the major commodity sectors covering over 30 individual commodity markets, most of which trade on U.S. futures markets. The report will give an up, down or neutral call on these markets for the coming week and will outline the technical and fundamental state of each market. At times, I will make recommendations for risk positions in the ETF and ETN markets as well as in commodity equities and related options. You can sign up for The Hecht Commodity Report on the Seeking Alpha Marketplace page.

Disclosure: I/we have no positions in any stocks mentioned, and no plans to initiate any positions within the next 72 hours.

I wrote this article myself, and it expresses my own opinions. I am not receiving compensation for it (other than from Seeking Alpha). I have no business relationship with any company whose stock is mentioned in this article.

Editor’s Note: This article covers one or more stocks trading at less than $1 per share and/or with less than a $100 million market cap. Please be aware of the risks associated with these stocks.