The blockchain is slowly changing the world of technology. Just recently, another country is looking at the potential of Blockchain Technology to enhance foreign transactions further.

Blockchain was used to develop digital currencies like Bitcoins and Ethereum. The same technology is now used to develop processes in different industries like the entertainment, travel and tours, and even the food industry.

Another potential use of this technology is to provide a stronger security platform for local and foreign transactions. This also has a massive probability in eradicating corruption in different government agencies.

Let us see how this impacts different countries.

What if you could wave your phone over a piece of fish at a store and immediately see a record of its path through the supply chain?

This may soon be possible. Current experiments are testing technology that can show how the fish was caught when it was shipped and how it was processed at a factory.

This technology, called Blockchain, is being tested for its potential to bring light to secretive industries in Southeast Asia.

Blockchain was first developed to confirm dealings in bitcoin, a digital money. In that case, the technology creates a public financial record.

In Southeast Asia, important records, including those of identity information and property ownership, are often not carefully kept.

Erin Murphy is the founder and leader of Inle Advisory Group, a business advisory company working in Myanmar and other countries with developing markets. She said Blockchain technology helps make business operations in such countries safer and easier.

“Ideally, we would want to see the adoption of Blockchain at an official level all across the region. But perhaps not surprisingly, the governments that are leading Blockchain adoption are those that are already low-corruption,” she told VOA.

In some countries like Singapore, Murphy said Blockchain is being used to improve customer service processes. However in other countries, like the Philippines, Blockchain helps citizens safely send money home from foreign countries. 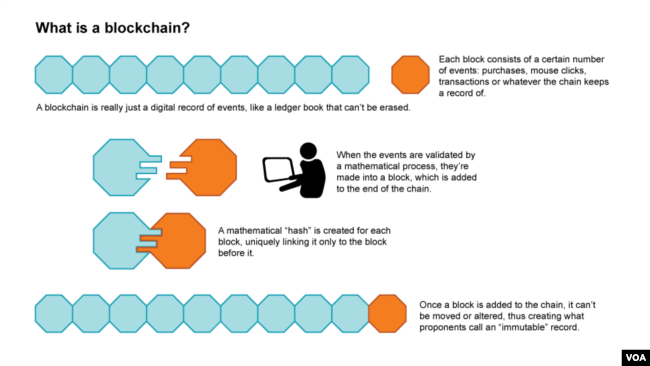 Right now, there are many programs in Southeast Asia experimenting with Blockchain technology.

In June, the United Nations presented a Blockchain-based system built in partnership with the technology company Microsoft and professional services company Accenture. The system gives stateless refugees a permanent identity record based on biometric data.

The technology is also being explored in connection with efforts to improve voting system security.

A Blockchain based app developed to observe the supply chain of fish from Indonesia is now being used in other industries, including clothing.

Results from a pilot project can be found on the internet. Viewers can observe the movement of a piece of clothing from an alpaca farm in Dulverton, Britain, through every step of production to its final stop at a shop in London.

Alisa DiCaprio is the head of research at R3, a banking software company that uses technology similar to Blockchain. She said getting the technology and being able to use it are separate issues.

Most countries have engineers who can rightly code the technology, she said. However, they do not always understand how to make it work for businesses and industries.

DiCaprio predicts it will take about five years before we actually see Blockchain used widely. She said she believes the most important effects of the technology will be seen on a macroeconomic level.

Division in the community

However, the Blockchain community is divided on how the technology should be used.

Some see Blockchain as a tool that can interfere with a global financial system they believe is corrupt.

“There is a serious opportunity for us here to remove money out of government,” said a Southeast Asia based bitcoin trader.

He said billions of people who are unable to use an official banking system will be able to move money with just a phone.

Another group wants to see Blockchain technology used by states, such as Canada, Singapore, China, and Germany. All of these countries are exploring or experimenting with digital money using Blockchain.

Michael Hsieh is with the Center for International Security and Cooperation at Stanford University. He suggested that Blockchain creates a threat for governments only if they ignore the technology. Countries that use it to establish safe and honest systems for money exchange will appeal to business and investment interests, he said.