Should Investors Choose Between Bitcoin vs Ethereum?

According to Bitcoin.com, Bitcoin is different than the other currencies you’ve used before. Unlike government issued money, that can be inflated at will, the supply of bitcoin is mathematically limited to twenty one million bitcoins, and that can never be changed. It is impossible to counterfeit or inflate. You can use them to send or receive any amount of money, with anyone, anywhere in the world, at very low cost. Bitcoin payments are impossible to block, and bitcoin wallets can’t be frozen.

Meanwhile, according to Ethereum.org, Ethereum is a  decentralized platform that runs smart contracts: applications that run exactly as programmed without any possibility of downtime, censorship, fraud or third party interference. It enables developers to create markets, store registries of debts or promises, move funds in accordance with instructions given long in the past (like a will or a futures contract) and many other things that have not been invented yet, all without a middle man or counterparty risk.

The recent surge in prices of blockchain currency Ethereum (ETH) has many in the alternative investment community chattering. With the Bitcoin (BTC) price in 2017 at all-time highs, the patriarchal cryptocurrency is actually being upstaged at the moment by Ethereum, whose price action is mimicking Bitcoin’s epic ascent five years earlier. Many investors continue to believe in the Bitcoin value 2017, but many are new to the Ethereum story. In the battle of crypto preeminence, there are only two real competitors in 2017: Bitcoin vs Ethereum.

Why is Ethereum different to Bitcoin? One of the major difference is the time it takes to process “blocks.” Bitcoin’s average block time is about 10 minutes, while Ethereum’s is only around 12 seconds. This faster time is owing to Ethereum’s “GHOST” protocol, and its ability to handle more data. This is a huge advantage because faster block times mean confirmations for things like transactions are quicker. Slow transaction speeds are one of the major impediments to Bitcoin receiving more adoption among payment providers and vendors.

Another major difference between Bitcoin vs Ethereum is the depth of their monetary supply. A little more than three quarters of all bitcoins have been mined presently, and the supply is exceedingly low (16.24 million mined; 21 million maximum supply). On the other hand, Ethereum does not carry a hard supply limit. Over 89,752,192 coins currently exist in supply, and this will only grow at a brisk, but steady pace in the future.

This is a huge advantage for Ethereum’s case as a currency, since Bitcoin’s appeal to the masses could be shunted by the low supply. Yes, Bitcoin is divisible, and as such, shouldn’t be a problem in theory. But with only a maximum circulation of 21 million coins and seven billion people in the world, there’s a slight supply/demand problem. Who really wants to carry one twentieth or one hundredth of a bitcoin in the wallet and transact in fractions? People will get used to transacting this way over time, but the more mathematically challenged may be dissuaded. Right out of the gate, ETH doesn’t have this impediment.

Bitcoin and Ethereum hold differences in the way they cost their transactions. The Ethereum method, called “GAS,” measures how much “work” a set of actions takes to perform. The cost of a transaction depends on such variables as storage needs, complexity, and bandwidth usage. In Bitcoin, the transactions are limited by the block size and they compete equally with each other.

Finally, Ethereum features its own Turing-complete internal code, meaning developers can write programs that can solve any reasonable computational problem. There are certain benefits to being Turing-complete, such as the complexity of problems it is able to perform. It also brings about certain security complications, but that is beyond the scope of this writing. Bitcoin does not have this ability.

Now that we’ve discovered some key differences between Bitcoin vs Ethereum, what about Bitcoin or Ethereum prices? This is the topic most relevant to investors.

As mentioned in the opening paragraph, Bitcoin is actually being upstaged in terms of percentage price gains, and the Ethereum price action is mimicking Bitcoin’s prodigious ascent five years ago. As recently as April 2011, a bitcoin buy could be had for mere pennies (less than $1.00 USD). As we all know, Bitcoin proceeded to make believers out of the investment community, gathering a head of steam, and rocket-riding its way to lasting four-digit price levels.

Ethereum may be on course for a similar trajectory.

As recently as late December 2015, an Ethereum buy could be had for mere pennies as well. Prices started to break out in January 2016, rising 15-fold in just a couple of months. After an inevitable period of consolidation, which was quite bullish considering the strength of the move (price held its 50% Fibonacci pivot), price went on the upswing again. Since the 50% Fibonacci hold in December 2016, Ethereum has proceeded to increase another fourfold in value, from the low $7.00s to over $28.00 as of this writing.

As the chart below demonstrates, it’s a move we’ve seen before in the cryptocurrency space. 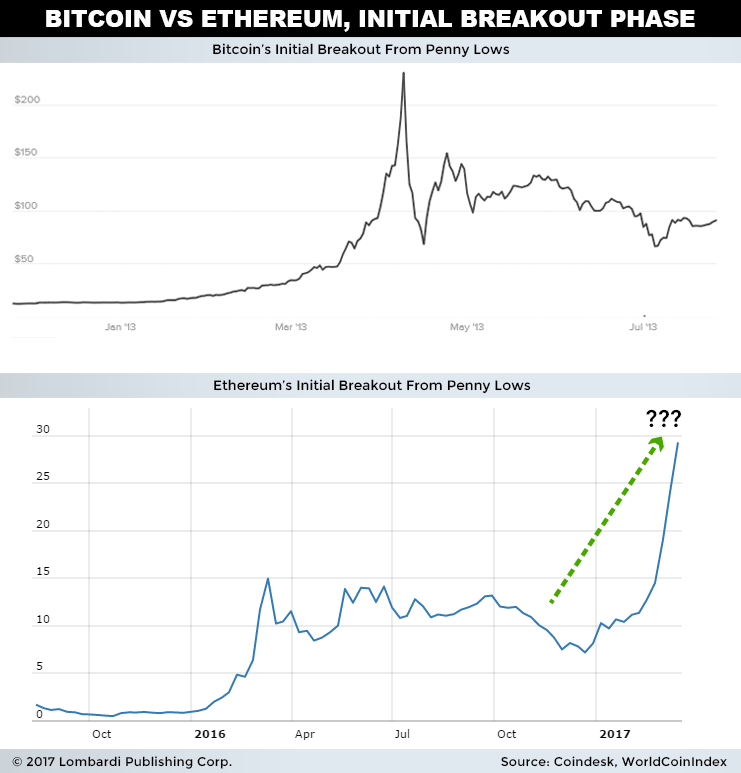 It’s important to keep in mind that due to the supply and demand dynamics mentioned earlier, Ethereum is unlikely to trade as high as Bitcoin on an absolute basis. With 89,752,192 Ethereum coins currently in circulation versus 16.24 million bitcoin, the equivalent aggregate price for BTC/ETH parity is approximately $226.00/circulation adjusted (as of this writing). Put another way, the entire Ethereum market would be equivalently valued to the entire Bitcoin market at $226.00 ETH. The equivalent value price is set to increase as time passes since Ethereum is more mineable relative to Bitcoin.

Like BTC, ETH trades on various crypto-exchanges, which have sprung up like mushrooms after an intense spring rain. Depending on the exchange, investors can remit crypto dollars for other crypto dollars, or fiat to crypto.

In terms of catalysts propelling BTC & ETH to new highs, both possess them in high supply. Ethereum perhaps even more so, owing to its recent arrival on the digital currency scene. It has been busy forging partnerships with major multinational corporations and government institutions, and this seems to be paying dividends.

Thirty of the Who’s Who in American Enterprise:

(NYSE:JPM) and others are unifying to build business-ready versions of the software behind Ethereum. The “Enterprise Ethereum Alliance,” as it is called, is scheduled to demonstrate a Beta version of the technology it seeks to employ. The plan is to exhibit a settlement of a foreign exchange spot trade using an adaptation of the settle layer. (Source: “Big Business Giants From Microsoft to J.P. Morgan Are Getting Behind Ethereum,” Fortune, February 28, 2017.)

This technology has serious potential of making equity, currency, futures—all sorts of derivative trading back offices—obsolete. While this might be bad news for metropolitan middle American jobs, it’s fantastic news for corporate profits.

A certain entourage effect seems to have taken hold since this project was announced. With the backing of so many corporate and institutional actors, investors seem to have more confidence in Ethereum’s viability as a valuable asset, leading to more transactions on the exchanges, and finally, catapulting prices. A virtuous circle of blooming interest and corporate demand. ETH has doubled in value again BTC since the news was announced.

Bitcoin has its share of catalysts as well, but these tend to be more macro-focused as the currency matures.

Right now, India’s transition to a predominantly cashless society is one such catalyst. Progress is coming swiftly, but it’s not without consequences. With over 90% of India’s payment transactions conducted in cash, tamping out this everyday activity is no easy task. By removing 500 and 1000 rupee notes from circulation, effectively removing 84% of cash from the money supply, India has gone all-in on bringing digital payment modernization to its society.

As Bitcoin competes with other forms of digital transactions, its popularity on the Indian subcontinent is growing. But as good fortune would have it, there are also not enough point of sale devices to keep up with consumer demand, let alone enough to meet future demand. As a result, Indian start-up

predicts the number of users of Bitcoin in India will be approximately 56% per year. (Source: “Demonetization is Leading to Another Catalyst for Bitcoin Demand and Prices,” BTCManager.com, December 2, 2016.)

As a reminder, India has a population of 1.336 billion people and 300 million Indians use their phones regularly for accessing the Internet. That’s a huge growing market and one where Bitcoin’s low transaction fees might give it a competitive advantage.

Should you invest in Bitcoin or Ethereum? Is Ethereum better than Bitcoin? These are pressing questions many are attempting to find answers to. Fortunately for the investment public, so is academia, which has attempted to quantify which investment is better over the long term.

in partnership with The Economist, launched a contest based on questions: You have $1.0 million to invest across bitcoins and ethers. You cannot touch your investment for the next five years. How much of that $1.0 million do you invest in each? Why? Thirteen teams participated by providing a detailed all-inclusive analysis of both cryptos. Some of the criteria involved included:

Below is a chart of the initial results of each participant, based on how they would allocate a theoretical $1.0 million investment between Bitcoin vs Ethereum. (Source: “Kraken Investment Case Study,” The Economist.)

Based on the results, Bitcoin is still the top investment choice, but it’s a relatively close decision. With Bitcoin’s first-in advantage, name recognition, developed payment systems et al, teams mostly agree that most investment dollars should reside there. However, it wasn’t the blow-out many would expect. These numbers seem to support Ether’s potential to replace Bitcoin as the network grows.

Either way, the digitization of money means both currencies should see exponential growth in the coming years. As the patriarchal model for the archetype cryptocurrency, Bitcoin should continue to see steady usage and payment growth as world governments continue to go cashless.

With Ethereum’s much faster transaction speeds, higher data handle, larger currency float, and widespread corporate adoption, ETH has its own appeal. The strong sustained price action is showing this to investors.

In the decision between Bitcoin vs Ethereum, the verdict is in: both are winners by unanimous decision.